You’ve probably spent untold hours of your life trying to tame this wild pant,. ripping it endlessly off of your lawn, only to curse your neighbours who have let theirs go to seed and blow all over your hard-earned sterile lawn! The humble dandelion is nothing if not resilient and adaptable!  It can be found on all the continents and has survived 30 million years.  You will never keep it from your lawn, no matter how much you pull, overseed, poison or curse the happy yellow flower.  But, I’m here to tell you, the dandelion is your friend!

The dandelion is a beneficial weed.  Not only has it been gathered as a source of human food since prehistory, it is a wonderful  companion plant for gardening. Its taproot will bring up nutrients for shallower-rooting plants, and add minerals and nitrogen to soil.  It attracts pollinating insects and releases ethylene gas, which helps to ripen fruit.  It is an important source of food for some birds.  Bees love dandelions, and they are a source of nectar and pollen.  They are sources of food for some moths and butterfly larvae, as well as a species of early butterfly.  Some animals, such as rabbits find them an irresistible treat.

Before the advent of modern medicine, dandelions were used by herbalists and knowledgeable folks as an important diuretic, which was used to to treat liver and bile disorders.  It remains culturally important in some areas, where it is not considered a pest.

Nutritionally, the dandelion is much like it’s other salad greens.  It is low in fat and calories, high in essential vitamins and minerals and fibre, most specifically Vitamins A and K and C, and are good sources of calcium, potassium, iron, and manganese as well.  In fact, it is so high in Vitamin K (potassium) that it can also increase the risk of hyperkalemia when taken with potassium-sparing diuretics.  At 428 mcg K per 1 cup greens, that’s 535% of the daily recommended intake!

How to Eat Dandelions

The parts of the dandelions to be eaten are: the flower, the leaves and the root.  It should be noted that while it is incredibly easy to harvest dandelions, great care should be taken in ensuring you know the source of the plant, and also that it is, in fact a dandelion.

While dandelions are everywhere, you need to make sure the dandelions are not ones that have been exposed to pesticides not meant for human consumption, such as round-up.  That field of dandelions by the interstate may be plentiful, but it is not food for you!  The best ones are likely in your own yard, or maybe you can offer to weed the lawns of friends and neighbours!

Next, make sure you are in fact harvesting dandelions.  If you are going to use the roots, make sure that root is attached to an actual dandelion, and not another species brought up in the same clump of dirt.  There are things in nature that can kill you faster than a bullet, and you don’t want to eat those things! Edible Wild Food has good information as to identifying dandelions as well as some additional recipes!

Remember, just because it looks like a dandelion, doesn’t mean it is one.

Ok, so now you have found actual dandelions, and you’ve done the hard work of pulling them up by their roots, and you’re ready to eat!  Here are some recipes we enjoy in my family, most specifically the Dandelion Root Tea which we try to harvest enough of to enjoy year round!

Really, you can just pull those luscious yellow flowers off the stems, pop them into your mouth and chew!  I would recommend washing them first though, because while you have ensured your source is pesticide-free, there’s this kind of thing to consider. You should go ahead and taste one though, why  not?  After you’ve done that, go ahead and try one of the delectable recipes below!

Pour boiling water over the flowers and let steep for at least five minutes. Add honey or sugar.  Enjoy!

Combine the flour, seasoned salt, and pepper.  In a separate bowl, beat eggs, then stir in dandelions until coated.  Melt the butter in a large skillet over medium heat.  Remove 1/2 the dandelions from the egg and allow the excess egg to drip away.  Toss in flour mixture until completely coated, then gently toss between your hands to remove excess flour.  Cook in the melted butter until golden brown, stirring occasionally.  Drain on a paper-towel lined plate.  Repeat until all the dandelions are gone. This recipe can also be found here: All Recipes. 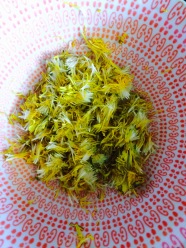 Preheat oven to 375°F.  Blend oil and honey and beat in the two eggs and vanilla.  Stir in flour, oatmeal and dandelion flowers.  Drop the batter by teaspoonfuls onto a lightly oiled cookie sheet and bake for 10-15 minutes. 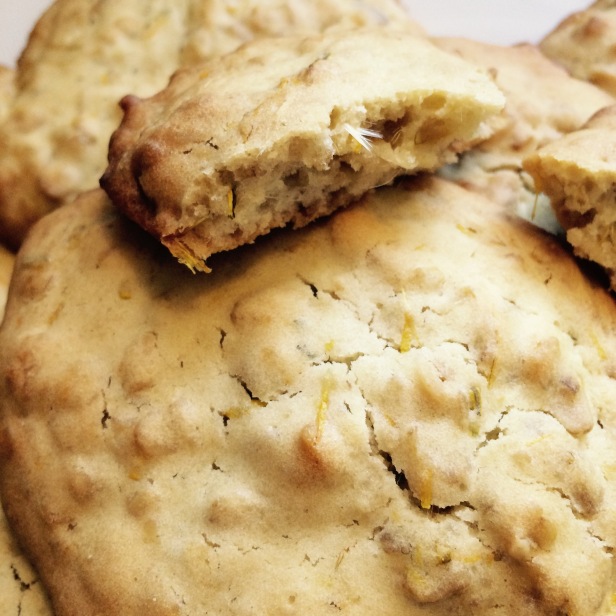 You can harvest the leaves at any point in their growing season.  These can also be eaten fresh out of the ground (after washing).  They are quite bitter. Generally the little leaves are less bitter and more palatable raw.  Throw them in a salad, for a little extra complexity and flavour.  They can be steamed, stir fried, or added to soup.  Cooking them does seem to make them less bitter.  Leaves can be prepped ahead of time by boiling 3 days ahead. Chill, wrapped in paper towels, in a sealed bag.

Cook greens in a 10-to 12-quart pot of boiling salted water (3 tablespoons salt for 8 quarts water), uncovered, until ribs are tender, about 10 minutes. Drain in a colander, then rinse under cold water to stop cooking and drain well, gently pressing out excess water.  Heat oil in a 12-inch heavy skillet over medium heat until it shimmers, then cook garlic and red-pepper flakes, stirring, until pale golden, about 45 seconds. Increase heat to medium-high, then add greens and sea salt and sauté until coated with oil and heated through, about 4 minutes.

I can’t wait to try this recipe: Dandelion & Pumpkin Pesto

Dandelion roots taste a bit like turnips, perhaps like a bitter turnip.  You can boil them and eat them, if you like that kind of thing.  It’s basically like cooking a carrot, you wash them, peel them and then boil them until they are soft enough for a fork to go through.  You can roast them like parsnips, clean peel and  add a little olive oil and set them in the oven on a roasting pan.  You can substitute them in pretty much any recipe that calls for a root vegetable for a more interesting taste.  Similar to the dandelion root tea recipe I’m about to share with you, you can also make Dandelion Coffee.  You can also preserve dandelion root, the same way you make this tea.  It’s a nice bit of summer in the dark winter hours.

Collect a large number of dandelion roots, you need a lot.

Separate the roots from the flowers, wash them really well.  They are super gnarly, it’s best to take off all the little root-hairs.  Some people peel them (the peels are bitter), but I do not mind this at all in dandelion tea.

Chop them up into little pieces, and place them on a baking sheet or roasting pan.

Roast them in the oven at 250F for 2-3 hours until they are dehydrated.  Alternatively, you could actually use a dehydrator.

Store in a clean, dry, airtight container until ready to use!  Use it like regular loose-leaf tea, steep it in boiling hot water for about 5-10 minutes and sweeten to your liking.  Some excellent flavours you can try with your tea are cardamom seeds, cinnamon or ginger.

So there you  have it, a basic overview of the humble, much misunderstood dandelion.  It’s a nutritious, inexpensive, easy to prepare source of food that has many uses.  It could easily become a staple food in your home!  Or, at least in the case of a zombie apocalypse, you’ll know how to make a little tea!

I hope you’ve enjoyed this little bit on dandelions, and I hope your excited to try a new thing!  As always, please take pictures and leave them in the comments if you try something you see here!

2 thoughts on “Dandelion Root Tea and Other Recipes”

Looking for One of These?