Spring is finally in full-bloom and I like to take a walk around my property to see who’s coming up this year.  I do keep my own gardens and we have a lawn, but we like let much of the property grow wild.  In our back woods, there’s a swamp.  It’s dry in the hight of summer, and of course it’s frozen in the winter, but it’s a fascinating place.

These flowers, however are from the edges of our lawn and along some of the natural features on the border of the woods.

Who could forget these little beauties??  I think I could it among these delicate sweethearts and admire them all day.  Our Forget Me Nots mostly grow around the remnants of a tree stump that fell over during a tornado some years ago.  My kids love to play on that stump; they have all kinds of adventures!  They also grow up near the back driveway where there is a lot of drainage from run off rains and our swimming pool!  Forget Me Nots love moist soil.  They are an important food source for the butterfly and moth larvae.

The Forget Me Not: Legends and Lore

There is plenty of lore about the Forget Me Not.  Perhaps the most famous is the tragic tale of a night and his beloved.  The medieval knight, who upon plucking a posy of flowers fell into the river.  His armour was so heavy he drown, but not before throwing up the flowers to his lover crying, “Forget me not!”

In 15th century Germany, a person might wear it as a ward that they may not be forgotten by a lover.  Some cultures believed them to be protection from witches.  Henry IV adopted it as his symbol during exile, and kept it upon his return to the throne.  Many countries have taken the flower as a symbol of remembrance of their lost soldiers and Freemasons have used it as a message not to forget the poor and desperate. As well as being a symbol for remembrance and luck, these flowers are also representative of true, faithful love, fond memories and hope, and are quite commonly seen in arrangements that can be given to loved ones and friends.

It was thought at one point that Forget Me Nots were a curative for the scorpion sting, and were called Scorpion Grass.  Dried Forget Me Nots can be used to make a tea.   They have a pleasant, slightly earthy/grassy flavour.  Some herbalists claim it is soothing to the nerves, promotes better sleep, better skin and even weight loss.

Garlic mustard is considered an invasive herb in Ontario.  It was brought over from Europe in the 1800s as a crop, and quickly spread out of gardens and into the wild.  It can displace native wild flowers such as trillium and several of the plants listed on our threatened list including American ginseng, drooping trillium, false rue-anemone, hoary mountain mint, white wood aster, wild hyacinth, and wood poppy.

How the garlic mustard wages war against it’s neighbours is rather interesting.  Garlic Mustard produces allelochemicals, mainly in the form of the cyanide compounds allyl isothiocyanate and benzyl isothiocyanate, which suppress mycorrhizal fungi that most plants, including native forest trees, require for optimum growth.  However, allelochemicals produced by Garlic Mustard do not affect mycorrhizal fungi from Garlic Mustard’s native range, indicating that this “novel weapon” in the invaded range explains Garlic Mustard’s success in North America.  Additionally, white-tailed deer don’t seem to find it quite so tasty, so they will bypass it for the native plants.  However, as their hoofs crush the plant they carry the seeds all over.  The garlic mustard is a formidable foe indeed!

Garlic mustard is not easy to get rid of.  They have a strong root system, and dense stands can produce more than 60,000 seeds per square metre!  Stands of garlic mustard can double in size every four years.  And we have them everywhere.

In my opinion, the best way to get rid of garlic mustard is to eat it!  You cannot compost it (lest it spread it’s seeds), so instead of putting it in a garbage bag destined for the dump, I suggest you make a meal or two of this cruciferous vegetable!  Garlic mustard is extremely high in vitamin C, more so in fact than broccoli (261mg vs 93mg per 100 gm).  It is also high in minerals elements, caratenoids, and fibre. Of course, as with anything you forage for food,  you’ll want to make sure your garlic mustard hasn’t been exposed to chemical eradication methods first.

The stalks, leaves and seeds are all edible.  The stalks are palatable if you get them before they flower.  They are rather bitter when raw, but boiling them sweetens them a bit.  I tend to think they taste a bit like broccoli.

Check out recipes and more on my post, Garlic Mustard Recipes.

The leaves are sharp and peppery, similar to mustard greens. I don’t find they taste garlicky. They are not bitter until the flowers have gone to pod.

Garlic mustard often grows along hedges, having earned it the name jack-by-the-hedge.  If you crush the leaves or flower, it will emit a strong garlic-smell and has been referred to as “Poor Man’s Mustard”.

There are so many varieties of violets in my yard and in my woods!

Violets are so sweet.  They tend to be so tiny and unassuming, but when you get up close they are a riot of interesting patterns and colours.  There are so many recipes for violets.  The leaves and blossoms are great sources of vitamin C ;and the leaves also in vitamin A.  Really they are quite enjoyable when just plucked and eaten!  But the flowers make an exceptional jelly, and the leaves are good in salads. 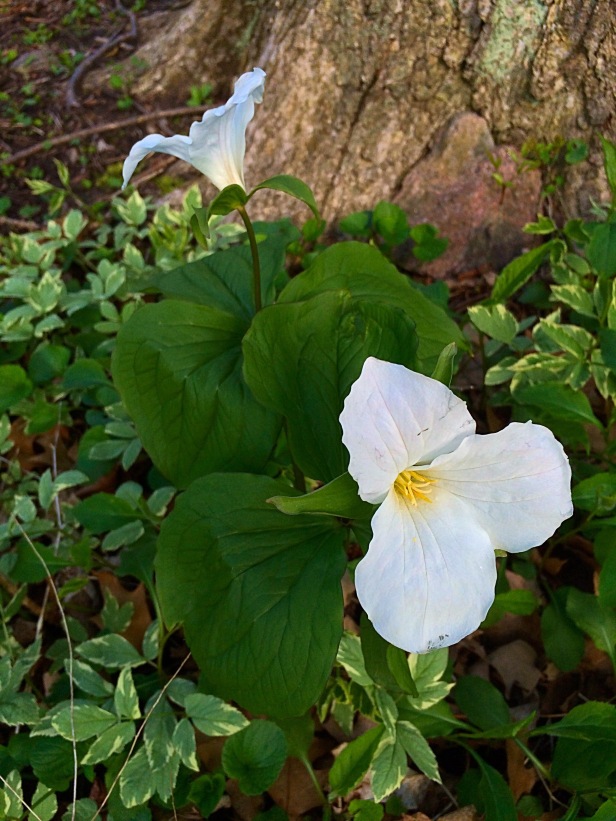 Also known as: wakerobin, tri flower, birthroot, birthwort.  It grows plentiful in these parts, as it should since it is Ontario’s provincial flower!  They are actually considered a threatened or protected species in many parts of the North America, and even though they seem plentiful here, there are restrictions on who can disturb a trillium and why.

They come in a few different colours, we have the white and the purple around here.  THey are absolutely lovely.

It has been said that trillium is a uterine stimulant (thus the birthwort name).  I have no experience with this however, as it is a flower that must be left intact and growing (it’s actually quite sensitive, you cannot harvest any part of it without likely killing the whole plant).

In addition to being the provincial flower for Ontario, it is the wildflower of Ohio.

They can look almost preternatural.

I guess a lot of folks think periwinkle is an annoyance, but I think they are so beautiful!  They grow along the lawn borders at my place, close to trees.  I’ve actually been thinking of transplanting it to the front where I need some ground cover, but I think it will likely be too sunny for them there.

Periwinkle has long been used in the mystical arts.  It was considered an important charm by sorcerers in the Middle Ages.  They believed it had the power to ward off evil spirits.  It was used medicinally to improve “brain circulation” and heavy menstrual periods.

Lily of the Valley

Growing in great abundance, carpeting the floor under the trees at the edge of the forest are these adorable little bells.  This sweetly scented but poisonous plant grows with such abandon on our property that in early spring it looks like a carpet of lily of the valleys.

Lily of the Valley Legends & Lore

In Christian mythology, the lily of the valley often represents tears, and sometimes as the second coming of Christ.  In other legends, it symbolizes the return to happiness.  It’s long been a popular symbol in bridalwear.  It is the national flower of Finland.

Looking for One of These?